Artificial intelligence is changing the world, helping to streamline repetitive, mundane tasks for business professionals, freeing up human workers to focus their time, money, and valuable brainpower on tasks of a much higher caliber.

For attorneys, one of the best things to come out of this A.I. revolution has been the introduction of technology assisted review.

But what exactly is technology assisted review? How is it changing the legal landscape? And what is Veritone’s role in all of it?

Technology assisted review (often referred to by its acronym, “TAR”), is a broad term that refers to the use of complex, machine learning software to streamline e-discovery processes.

Or, in layman’s terms: “Using technology to help stuff get done faster.”

Rather than replacing humans in some kind of legal robot dystopian, TAR works in tandem with human reviewers. Here, machine learning software applies human directives to digital information, in order to expedite electronic discovery. Without human input, TAR could not function, making it more of a computerized assistant, rather than a Terminator.

TAR is the next step in document review evolution, and for law firms and review teams, it couldn’t have come at a better time.

Why Do We Need Technology Assisted Review (TAR)?

Unfortunately, the brilliant, technological advances that have propelled humanity into the modern era have had the dual effect of both helping and hurting the legal industry—in particular, the human reviewers conducting electronic discovery.

Take computers, for example, which have all but eliminated the need to process, filter, and organize information by hand. Instead, attorneys can now store everything in neat, digital folders, which are kept in clouds, and can be easily accessed, copied, shared, and distributed between team members with the click of just a few buttons.

However, those same processes also make the production of digital information that much easier. And with the pool of unstructured ESI increasing faster than reviewers can keep up with, humanity’s digital footprint is turning e-discovery into a huge problem child for document review.

This is where TAR comes into play. Here’s how.

In early TAR models, a human coder used test documents to “teach” A.I. software how to recognize and label documents.

This process began with a human coder, who would apply search parameters to a sample section of the review’s most relevant content. Once coded, test documents would then be fed into the A.I. learner software, which—depending on the model—would then code documents in one of two ways:

SAL and SPL are both examples of “predictive coding,” since machine learning software uses coding parameters to “predict” what will be most relevant to a review.

The Problems with SAL and SPL

For developers, this was a conundrum, since early TAR models had proved to be actually quite effective during test reviews, outperforming human coders more than half of the time. After studying the issues, they soon realized that it wasn’t so much a problem with the programs, as it was an issue of human perception.

Unfortunately, in a predictive coding scenario, the differing perspectives of human coders unintentionally ended up shifting the direction of a search over time, producing those weirdly frustrating results for the learner’s human counterparts.

However, with improved designs, and the implementation of a continuous active learning (CAL) model, things are looking up for modern TAR programs.

Recent updates in A.I. software have produced far better solutions to electronic discovery’s problems than simple active and passive TAR learners. One such solution is the introduction of a model known as continuous active learning (CAL).

Unlike e-discovery conducted with SAL or SPL, a CAL-driven document review needs very little babysitting. This is because CAL software is self-learning.

In a CAL review, A.I. software uses its input parameters to begin coding everything it can identify, while simultaneously feeding its reviewer the information it can’t. As human reviewers code and return this data back to the system, CAL programming uses this information to make self-improving adjustments to its algorithms, enhancing its own review accuracy without needing any further input.

CAL learning models virtually eliminate the need for a second review, since, by the time the TAR software has stopped learning, the review is complete. And these models are quickly becoming a must-have in the next generation of TAR software.

Veritone’s one-of-a-kind flagship, aiWARE, is one such program.

Unlike TAR systems of the past, Veritone’s aiWARE is the first of its kind to unify hundreds of the best A.I. machine learning models under a single, easy-to-use platform.

The unification of these tools under one umbrella makes the computer-assisted review a breeze. With aiWARE, attorneys have access to hundreds of natural language processing engines, in multiple languages, allowing them to transcribe, filter, reduce, and categorize information in any digital medium, imaginable—all without the need for a highly technical, specialized workforce. 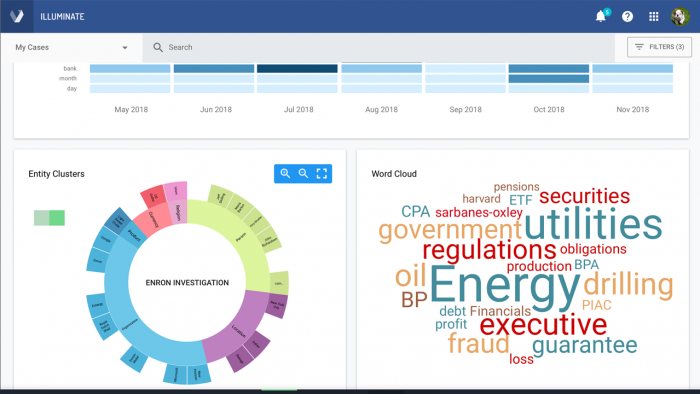 With aiWARE, Veritone addresses the limitations of previous TAR software, offering attorneys a wide array of multi-functional tools that can be used to eliminate the biggest hurdles in document review—and, more specifically, the growing leviathan of unstructured ESI.

Once upon a time, several pairs of 20/20 vision and a handful of good sharpies were all a review team needed to process evidence. But our modern world is a different beast, entirely, and society’s technological leaps have resulted in an unprecedented uptick in unstructured data that has expanded e-discovery to include photos, videos, jailhouse calls, CCTV footage, emails, texts, instant messaging, live streams, and so much more.

Under this influx, attorneys are scrambling to keep up.

Fortunately, with Veritone aiWARE, legal professionals can now rest easy knowing that TAR—and all its future advances—are more than capable of meeting the future of unstructured data, head on.