Veritone is intrinsic to this entire venture with the brilliant MAM capabilities of Veritone digital media hub and aiWARE.

For diehard football fans everywhere, COPA90 is “How Football Feels.” That tagline says it all: As the world’s largest independent football media business, COPA90 reaches millions of fans and followers across a multitude of online platforms and social media channels like the YouTube channel “COPA90 Football”. Unlike traditional rights holders that stream live matches, COPA90 focuses on the world of fan culture – serving up a rich helping of content ranging from chats with favorite footballers and in-depth documentaries to amazing animations and explainers about the biggest stories in the game.

In its role as a content creator and publisher, COPA90 has amassed a tremendous volume of content over the years – close to 350 terabytes representing millions of individual video assets. Content was formerly stored on many different types of disconnected repositories ranging from portable hard drives to individual Google Drive and Dropbox accounts. With storage so fragmented, COPA90 editorial teams didn’t have a comprehensive means of searching on and discovering specific types of content.

As we started to scale the business, we realized we needed a more effective way of managing our content assets to keep us as agile as possible,” says Barry Flanigan, chief product officer at COPA90. “Job number one was to get our hugely valuable content archive into a secure cloud system, where it could be organized, intelligently tagged, and made instantly accessible to our editorial teams around the world. And job number two was to make it fast and easy for those teams to publish that content across our distributed media network, including our own websites and
social platforms and those of our distribution partners, broadcasters, and OTT platforms.”

COPA90 explored various traditional media asset management (MAM) options, including “rolling their own” in-house solution, but in the end decided to move to a 100% cloud-native MAM system. In addition to near-instant search, access, use, and distribution of targeted content, the COPA90 team felt that the cloud would offer greater security and system redundancy for protecting content assets.

With those objectives in mind, COPA90 chose two key technology partners – BASE Media Cloud and Veritone – to deliver an end-to-end, multicloud solution based on best-of-breed technologies. With BASE Media Cloud providing IBM Cloud Object Storage, the system incorporates Veritone® Core for cloud-native enterprise asset management. In addition, the cloud MAM system drives a branded Veritone Digital Media Hub, a white-label portal for management, delivery, and monetization – including the optional e-commerce functionality to license content to media partners around the world.

In record time – a little more than four weeks – the team completed the first phases of the project. All 350 terabytes of data were securely backed up and migrated to the cloud, and each asset was indexed and tagged with rich metadata to facilitate fast and easy search and retrieval and delivery to COPA90’s global platforms. 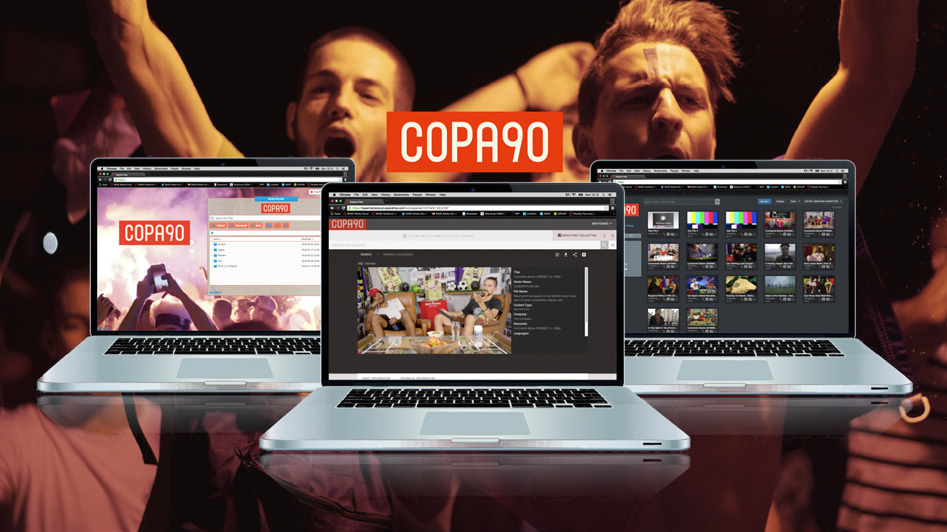 Ben Foakes, founder and managing director of BASE Media Cloud, comments, “Typically, old-fashioned MAM projects are notorious for taking months and years and millions of dollars to complete. But our tight working relationship with Veritone from previous sports-related projects, together with automation built into the Veritone Core and Digital Media Hub applications, meant we were able to build the multicloud MAM solution on time and on budget. And since this is a pay-as-you-go, software-as-a-service cloud solution, it will scale very easily as COPA90’s content continues to grow.”

MEETING THE NEED FOR SPEED

Content time to delivery is a core element in COPA90’s business model, and one that has been greatly accelerated through the new multicloud MAM system. “It’s really critical that we’re able to capture football moments as they occur and turn content around very, very quickly. What just happened in the game that fans are buzzing about on social media and messaging platforms? We have to get the content out there while the conversation is still happening, particularly with our young audience,” Flanigan comments.

After a particularly exciting match or other high-profile events, COPA90 receives a huge influx of fan-generated content from its Fan Creator network. The new multicloud MAM system enables the editorial team to clip, edit, and publish videos to multiple platforms in a fraction of the time it took with the old manual processes.

The true value of moving data storage and file transfer to the cloud hit home last June with COPA90’s coverage of the FIFA World Cup in Moscow. “We had roving production teams that were at the games throughout Russia, in addition to our production and editorial teams in London, New York, Los Angeles and Latin America. And we also had around 300 Fan Creators sending in footage from locations around the world,” Flanigan explains. “With the BASE Media Cloud storage system, we were able to make that fan content, along with the content we were creating in Russia, available almost instantly to our global editorial team. For the big emotional moments – for instance, when Germany got knocked out of the group stages and Mexico was able to advance – we were able to publish amazing footage of the fan reactions almost as they were happening.”

Flanigan adds, “We don’t have the massive resources of a traditional broadcaster, so this is a perfect example of how a cloud infrastructure can benefit an organization like ours. Our team was able to operate very quickly to create brilliant content.” 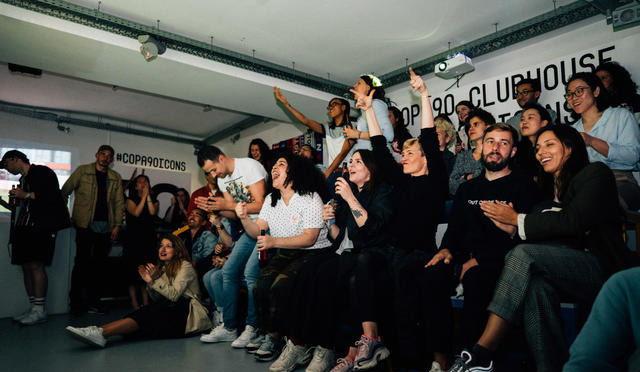 With the initial successes of the multicloud MAM solution, COPA90 is now working with BASE Media Cloud and Veritone to expand the system’s AI-driven workflows and intelligent metadata features.

FOAKES COMMENTS, “Veritone is intrinsic to this entire venture, not just for the brilliant MAM capabilities of Veritone Core, but also because we have access to (Veritone) aiWARE. It means we have a powerful toolkit to tap into and build clever AI workflows for managing inbound streams and outputting content with cognitively enriched metadata, which significantly assists in the rapid discovery and monetization of content.”

FLANIGAN CONCURS, “It’s early days with the AI features, but our vision is to deliver tailored content to individual fans on the device of their choosing, based on their location, the teams they support, and the types of content they have interacted with previously. That requires outstanding metadata enriched by AI, and an automated process that goes beyond what our human editors can accomplish.”

With aiWARE™, COPA90 will be able to automate content tagging and apply rich metadata that incorporates features like facial recognition, object detection, and automatic content/image classification.

“The ability to surface tailored content to fans automatically is just one huge advantage of rich metadata. The aiWARE platform will also make it much easier to find and reuse assets with specific items appearing in the shot; for instance, we have a huge volume of content shot over the years at exotic locations around the world with specific football stadiums in the background,” Flanigan notes. “Unless the editor specifically tagged the content with the name of the stadium, it would be really difficult to find that content. But with AI-driven tagging, we’ll be able to search and access these assets in an instant and use them to add even more color to our coverage.”

As a front end for content search, access, and retrieval, Veritone’s Digital Media Hub is already in use internally by the COPA90 team to create playlists and aggregate content for editorial teams around the world. As a next step, COPA90 is working with BASE Media Cloud and Veritone to build out the portal as a “shop window” for the types of content that can be licensed to specific distribution partners, including large media outlets.

“We’ve recognized that this huge volume of content that we’ve created over the years is actually a commercial product in its own right, with huge new potential for monetization,” Flanigan says. “We already get inbound requests from people such as broadcasters, filmmakers, and documentarians for specific clips, and now we see opportunities to create and market even more robust licensing products to our large media partners.”

He adds, “Digital Media Hub will make it possible for us to organize the assets and then make it quick and easy for people to come in and access the content they’re looking for, under the terms of a commercial, marketing, or editorial relationship. And one of the great things about Digital Media Hub is that Veritone has built in flexible terms that give different partners different types of access, based on their requirements and the specific license.”

Again, Veritone aiWARE plays an important role. David Candler, senior director of customer solutions, channel for Veritone, comments, “Digital Media Hub is what happens when an enterprise video platform meets an AI operating system. With AI-enriched metadata, not only will licensees be able to search and discover the precise content they’re looking for, but COPA90 will be able to surface specific types of content to distribution partners based on their profiles. For example, an Argentinian publisher would see a very different set of content than a distribution partner in Germany.”

CONCLUSION: BORN TO THE CLOUD

To date, COPA90 has migrated around half a petabyte of high-resolution media files to the multicloud MAM platform, launched international content distribution services, and enabled global file sharing between their London- and New York-based production teams representing hundreds of staff members. COPA90 is forecasting petabyte-scale growth in video assets – an expansion rate that simply would not have been achievable if they had chosen to build a traditional on- premises MAM infrastructure.

“Our long-term goal is to get our content on as many screens as possible around the world,” Flanigan notes. “The exciting thing about the FIFA World Cup last June (2018) was that it showed us how much we could achieve by moving our content assets to the cloud – and we could innovate in the realm of content publishing for a major worldwide sporting event.”

He adds that just before the football tournament, COPA90 launched a new service in China with help from a local partner that translates videos into Mandarin and assists with publication of content to the largest Chinese social media platforms. By August, COPA90 had generated more than a million new followers in China.

“Our Chinese launch is a brilliant example of how the multicloud MAM allows us to publish content in English and then make the project immediately available for localization in another language. They’re not just slapping on Mandarin subtitles – they have all the layers of the project, which enables them to recut and re-edit the video to make it relevant to Chinese fans,” Flanigan explains. “Trying to do something like that without the cloud would have been an incredibly clunky process of moving files around. And the end product would not have been as good because it would have been more difficult for the local partner to access the raw files needed for the localization.”

Working with BASE Media Cloud and Veritone to build the multicloud MAM infrastructure has opened new horizons for COPA90 to expand its business, reach new global markets, and respond nimbly with exciting, fan-pleasing content for every major happening in the global football world. “With our business built on scalable, flexible cloud-native technology, the sky’s the limit,” Flanigan says.

Veritone’s Candler adds, “Unlike many traditional media enterprises that are replacing old legacy systems, COPA90 is a modern online company that was born to the cloud and therefore a perfect candidate for Core and Digital Media Hub; in fact, it began as a YouTube channel. That gave it the luxury of building just the right cloud infrastructure from the beginning, and the ability to scale flexibly and rapidly. It’s been a pleasure to partner with BASE Media Cloud and COPA90 on this transformative project, and we can’t wait to see what the future holds for this exciting company.”