The webinar tackled some of the challenges and opportunities utilities face when managing an increasingly unpredictable grid. It also explored how AI could make energy dispatch cheaper and more reliable as utilities transition from centralized fossil fuel power generation towards a more decentralized patchwork of green distributed energy resources (DERs).

But first, some background.

The Challenges of Building a Truly Green and Intelligent Energy Grid
With over 1,200 MW of installed photovoltaic (PV) capacity, Tampa Electric Company currently generates more solar energy per customer than any other utility provider in Florida:

Despite servicing a growing population with ever-increasing energy demands, TECO has managed to slash CO2 emissions in half over the past 20 years, with a nearly 95% reduction in NOx, SOx, and other greenhouse gasses during that same time period.

In every way imaginable, TECO is in the vanguard of the larger sustainability movement thanks to its growing commitment to solar technology, which Sekar describes as “one of the most efficient and affordable pathways to improved environmental stewardship.”

However, solar power is, by nature, intermittent, making it difficult for the utility to balance energy supply and demand at an affordable price. Overcast days are obviously a problem. But even something as simple as passing clouds can cause momentary dips and surges in solar output – to say nothing of the wear and tear placed on inverters, panels, and other PV system components. And as more homeowners and businesses invest in their own solar installations, this balancing act will only become harder to manage.

Note that this situation isn’t unique to TECO, with utilities across the country all grappling with variations of the same issue. However, the problems associated with managing unpredictable solar power output are especially acute in Florida – the Sunshine State.

Using Battery Storage to Mitigate Solar Power Intermittency
For the longest time, batteries were the Holy Grail of grid management, given their ability to store and dispatch excess renewable power whenever conditions are right. And in fact, Tampa Electric had been using on-site energy storage as far back as 2019 at its solar-powered Big Bend facility. Nevertheless, without the ability to control its batteries in real-time, TECO had to set a charging schedule for its own PV-tied batteries manually and painstakingly.

This proved workable… when the goal was purely energy arbitrage. But by relying on batteries, the utility could only charge up when prices were low and discharge when rates went back up. However, Tampa Electric’s true goal was to use batteries to tactically manage inevitable spikes and dips in solar production – a strategy known as “solar” or “PV smoothing.”

In describing these challenges, Buckley points out that,

He goes on to say that,

“We felt like we were leaving value on the table, which is when we reached out to Veritone Energy…. We wanted to go more into PV smoothing, which is what Veritone helped us with.”

Another key consideration was how to extend device lifetimes across the facility, with unpredictable power surges placing undue stress on components like inverters and batteries. To remain compliant with manufacturer warranties, TECO had intentionally set conservative charging and discharging schedules for its batteries.

“Before Veritone, we would manage our [battery] warranties on an Excel spreadsheet to make sure that we weren’t violating these limitations. There really wasn’t a control system that would warn us that we were approaching warranty items. So we really had to manage this very well and stay on top of it daily…. It was a math game.”

How AI Is Digitally Transforming the Energy Landscape
Faced with the above challenges, TECO turned to Veritone’s artificial intelligence (AI)-driven iDERMS solution to help manage its increasingly complex grid. The utility company decided to use its Big Bend power station as a localized pilot test for deployment, given that it had 12.6 MW of on-site energy storage that charged exclusively from the facility’s nearly 20 MW of installed PV capacity.

In discussing some of the challenges with operating and managing renewable power plants, Sekar points out that, “[O]ne of the key requirements is to be able to synchronize all your renewable assets, so that they are working towards a common goal.”

The First Tentative Steps Towards a Greener and Smarter Grid
Early results from the Big Bend pilot test proved very encouraging. When the collaboration first began, for example, Veritone’s Forecaster module achieved an accuracy rate of 3.5% when comparing predicted solar output to actual production. But through iterative machine learning, the difference between predicted vs. actual solar power generation dropped to 0.5% in a matter of six weeks.

According to Sekar, this level of real-time accuracy,

“Helps you plan for things like your reserve margins and schedule your other traditional generators in such a way that you can account for a certain megawatt every hour of the day from your renewable power plant.”

Similar gains emerged at the inverter level, with a 33% reduction in temperature fluctuations and overheating. Not only does this help to extend the lifetimes of Big Bend’s inverters, but it also helps reduce the facility’s spinning reserve margin. The same is true of the on-site batteries, whose warranty management is now “automated,” according to Buckley.

Conclusion
TECO has taken a critical first step towards a renewable energy power plant that is fully dispatchable. Moreover, this pilot project represents an exponential leap forward for the larger industry as more distributed energy resources get connected to the grid.

“This huge influx of distributed energy resources is making grid operators and independent power providers and utilities rethink how their business is managed, operated, and controlled. The energy sector needs solutions to make clean energy more predictable, reliable, and cost-effective so that it becomes a viable solution for everyone to use.”

Veritone’s iDERMS platform is helping to bridge this gap via 21st-century tools like artificial intelligence and iterative machine learning to integrate greener energy sources into a 20th-century grid seamlessly. The end result is cheaper, cleaner and more reliable power designed to help society wean itself off of dirty and increasingly expensive fossil fuels. Better still, Veritone’s solution is scalable – made stronger and more accurate as it collects real-time data, continuously enhancing its predictions over time.

To learn more about how AI-powered technology is moving us closer to a truly green and intelligent smart grid, schedule a free consultation with Veritone today. 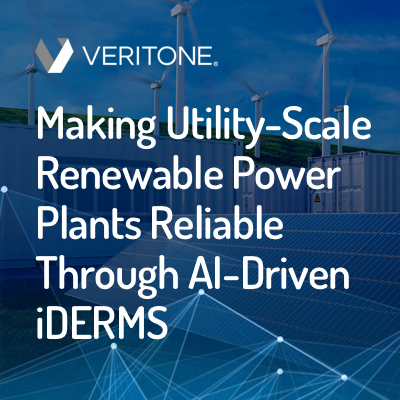