In the state and local government community, two distinct groups have unique needs that require redacting digital evidence software: District Attorneys (DAs) and law enforcement officers. Before video or audio evidence can be publicly distributed by these agencies, all information linked to an individual’s identity within the footage must be redacted. That requirement, coupled with an increasing volume of public information requests under the Federal Freedom of Information Act (FOIA), similar state statutes, and police consent decrees, contribute to an arduous and costly workflow.

This brief sets out how the AI-powered Veritone RedactTM digital evidence management software provides public safety agencies the ability to swiftly redact sensitive, personally identifiable or compromising information from their video or audio evidence in a secure and compliant way.

Maintaining Compliance Despite Surging Video and Audio Evidence More than 80% of criminal cases involve video or audio evidence, and IHS forecasts that 3.3 trillion hours of surveillance video will be captured daily in 2019. More than half of all medium-to-large police departments in the U.S. now use or are pilot testing body-worn surveillance camera programs. This growing body of evidence contains sensitive citizen identities and information, representing an expanded set of data public safety agencies must redact to maintain compliance with federal and state regulations in the distribution of video evidence.

In criminal proceedings, when minors are involved or personally identifiable information (PII) is present in evidence, DAs and public defenders are required to conceal all PII and any likeness of that minor within evidence or testimonies. Prosecutors may also elect to redact witness or informant identities and information linked to their identities, such as license plates or tattoos, if their personal safety could be threatened as a result of the case.

For law enforcement agencies, FOIA, public information requests, and police consent decrees require the public disclosure of digital evidence such as body-worn camera footage or interviews linked to related investigations. In order to preserve the integrity of ongoing investigations and protect witnesses, informants, and minors, officers must also redact partial or complete case information before releasing to the public.

In both cases, the amount of data that needs to be redacted under regulations is a burden for law enforcement exacerbating outdated digital evidence management workflows.

Outdated Intra & Inter-agency Workflows As FOIA and public information requests grow in number, so too are the amounts of body-worn, dash, surveillance, interview room and citizen provided camera footage produced and used as evidence that needs to be redacted. Historically, government agencies have manually redacted sensitive video and audio evidence when released to the public. This has been an arduous, lengthy and costly process. High earning District Attorneys and law enforcement personnel end up spending precious time on administrative processes to find PII in evidence for redaction rather than focusing on their more strategic functions.

Moreover, many times there is a sense of urgency to respond quickly, which only exacerbates the process and increases the likelihood that video or audio files may not be sufficiently edited revealing witness identities, putting them in harm’s way.

In addition to these extra costs, the distraction from investigation and case preparation results in fewer crimes getting solved.

By optimizing workflows, productivity is increased for DAs and law enforcement who are overwhelmed by the sheer volume of evidence to be redacted. Automated redaction provides agencies with much needed efficiencies and the ability to preserve ongoing investigation integrity that will ultimately help them solve more crimes and close more cases favorably.

Technology-driven AI makes all of this a reality. Let’s explore how with an intelligent digital evidence management tool.

How it Works: Harnessing AI to Streamline Digital Evidence Redaction

Veritone Redact law enforcement technology is an equipment-agnostic solution enabling users to simply upload audio and video evidence from a local computer or cloud repository. Once uploaded, users open redaction projects for specific evidence files to run automatic head detection. Detected heads populate in previewable lists for user validation, significantly cutting down manual review of evidence. Users can then define additional sensitive items appearing in the evidence such as license plates and choose to automatically track the defined item(s) for redaction throughout the video or audio file at a single timestamp. Once all automatically detected heads are reviewed and additional targets defined for obfuscation by the user, the evidence is easily redacted with one click. 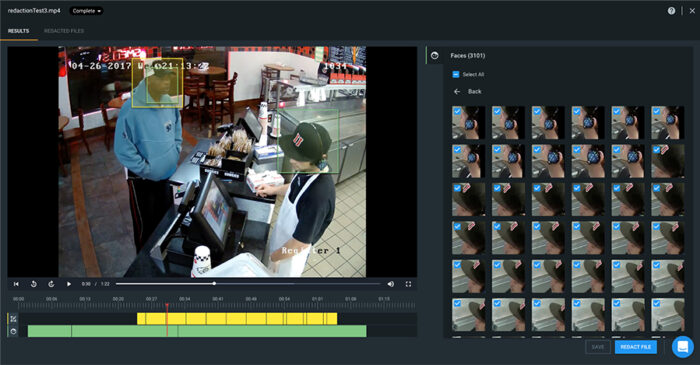 Packaged as a complete solution, Veritone Redact empowers agency teams to manage their digital evidence redaction workflow in one place with the ability to tag the status of evidence redactions, as well as export fully redacted video and audio files including audit logs detailing edits made to evidence by individual users to support chain of custody requirements.

Veritone is the creator of the world’s only operating system for AI, enabling fast to market extensibility of automated redaction capabilities within Veritone Redact to meet agency mission requirements. The solution can be integrated with frequently-used hardware providers and is deployable in either commercial cloud environments or secure government cloud environments that are configured to meet customers’ Criminal Justice Information Services (CJIS) security requirements.