With our operating system for AI, you can get cognitive engine delivered intelligence in two ways: either packaged within industry-specific solutions or in custom combinations via our open API. 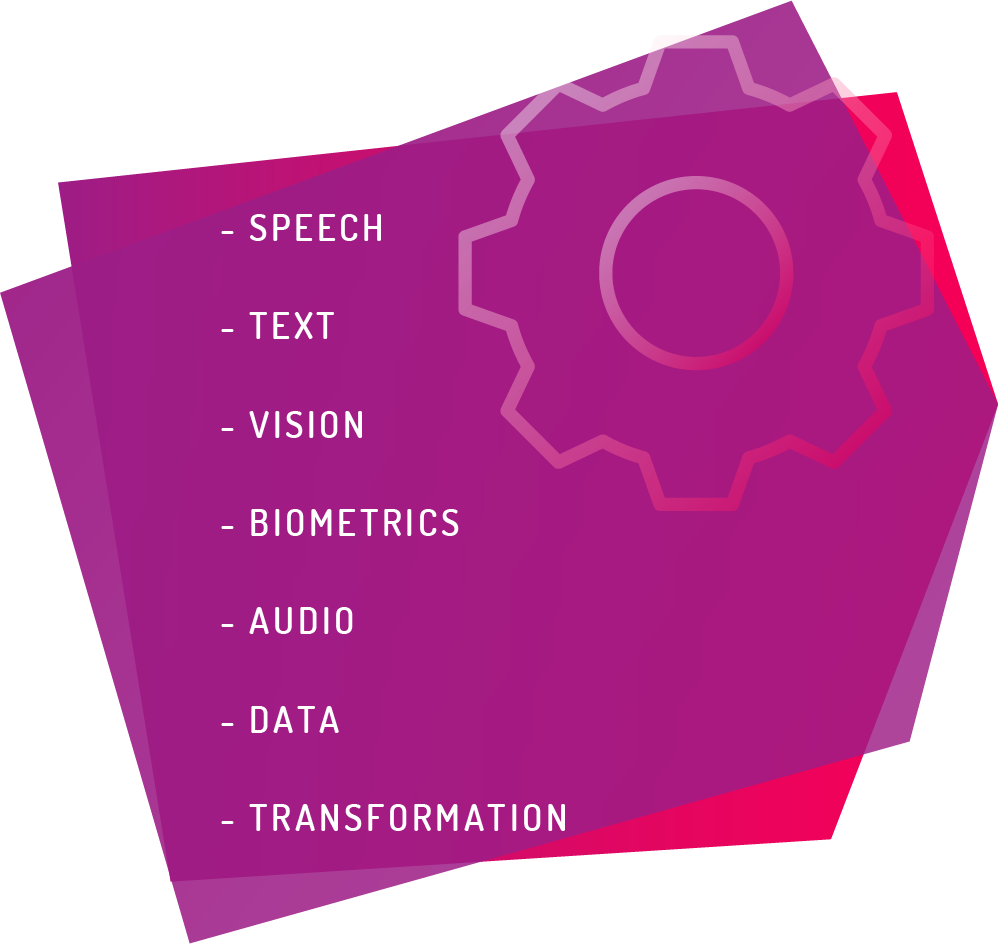 Over 10,000 Unique Cognitive Engines Comprise The Fabric Of AI

We built a machine-learning ecosystem of third-party and native cognitive engines that give you the breadth of capability and depth of specialization needed in AI applications to meet virtually any use case.

We continuously monitor cognitive engines in the market so we can give you the best machine-learning toolkits for custom development. Learn how to apply our ecosystem’s different cognitive capabilities within these classes.

Natural language processing (NLP) provides advanced text analysis enabling systematic functions such as recognizing the emotion behind an author’s words and transforming words into a dialect someone from a different region can understand.

Image-processing machine-learning algorithms intelligently identify, extract details from, and segment your pictures and videos. They also tag images with explicit or inappropriate content.

Biometrics analyzes the unique physical identifiers that make people who they are. AI harnesses this technology to detect the presence of a face or identify a specific person within photographs and video. When provided a library of known individuals, cognitive engines can learn to pick out most instances of a celebrity, known offender, employee, or more within visual content.

Discover how Veritone’s ecosystem of cognitive intelligence provide face detection and face recognition services for your image-based media and evidence.

Much like the human brain learns to detect and recognize meaningful patterns in sounds, artificial intelligence can capture audio signatures in order to detect future occurrences. These signatures or fingerprints are a compact representation of music, environmental sound, advertisements, and more, all of which can be differentiated from other noise.

Learn how our ecosystem of cognitive engines performs audio fingerprinting on your audio files.

Explore how Veritone’s ecosystem of cognitive engines conduct geolocation and correlation for your varying data types.

Data can be structured, unstructured, audio, or visual. Yet, due to the lack of harmony among different datasets, the data often must be transformed to create synergy or eliminate certain elements before you can use it.

Learn how aiWARE maps complex information and data and uses carefully orchestrated visual redaction and transcoding engines to create heterogeneous datasets you can use.