Veritone Core is a cloud-native digital asset management (DAM) application that leverages the power of aiWARE to automatically enrich the metadata of every asset it ingests. Designed for Media & Entertainment companies to transcode, store, manage, and deliver content such as video, images, audio, and other ancillary files. Core is capable of ingesting high volumes of incoming files of virtually any size and type... 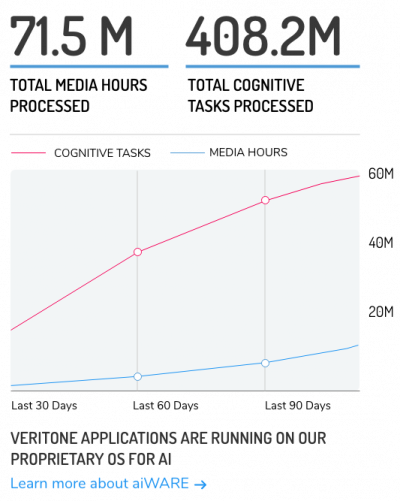 Manage and Accelerate the Use of Your Valuable Media Assets

Veritone Core gives you complete control over your content while simultaneously providing preservation and metadata enrichment so you can efficiently manage and monetize your valuable assets. Upon ingestion, Core applies cognitive metadata to audio, video, still images, and other assets, turning your archive into smart content that can be quickly searched, discovered, and shared with stakeholders and audiences around the world.

CONTACT US TO LEARN MORE OR SCHEDULE A DEMO