A Complete Guide to TV Advertising in 2022 and Beyond

The advent of streaming services and other digital channels has spotlighted the TV industry for advertisers. Many wonder what the future holds for the longstanding channel to consumers, looking to market sages to provide some insight.

In this first installment, we’ll cover:

The simple answer is no. TV advertising is not dead. However, while there are plenty of articles backed by that data touting the doom of TV, focusing primarily on cord-cutting, these articles tend to take too narrow of a focus on what’s going on in the space. TV is just another form of video content. And the boundaries between TV, streaming, and digital have become increasingly integrated and blurred.

TV advertising data tells another story as well. Despite all the talk of a digital conquest, TV still ranks as the second most profitable advertising medium in the leading advertising market in the world, the United States. It accounts for a quarter of all US media ad revenue. But as we cover in future blogs, we’ll see that the blurring of these lines across video channels has necessitated the demand for the union of data insights no matter the prescribed video channel.

A look at the TV advertising market

TV Advertising across the board took a hard hit due to the pandemic. Many pulled back ad spending as uncertainties around the economy mounted. At the time, many organizations were trying to protect their business and avoid layoffs, which is understandable. But advertising is not something that you can turn on and off easily, which hurts brand awareness, among other things. We discussed creating an advertising strategy to better prepare for future disruptions on the Veritone One blog.

However, the outlook for TV advertising in global and local markets is very different.

What’s the state of the global broadcast TV advertising market?

Due to the pandemic, the TV advertising market in the United States saw a dip in spending of a little more than 15%, falling to 60 billion. However, television advertising is already seeing a rebound in the US and across the globe. Worldwide TV advertising growth is up by 11.9 percent, growing by 17 billion between 2020 and 2021. But it’s expected that the TV advertising industry won’t reach 2019 levels until 2023 and will flatten out in the following years. 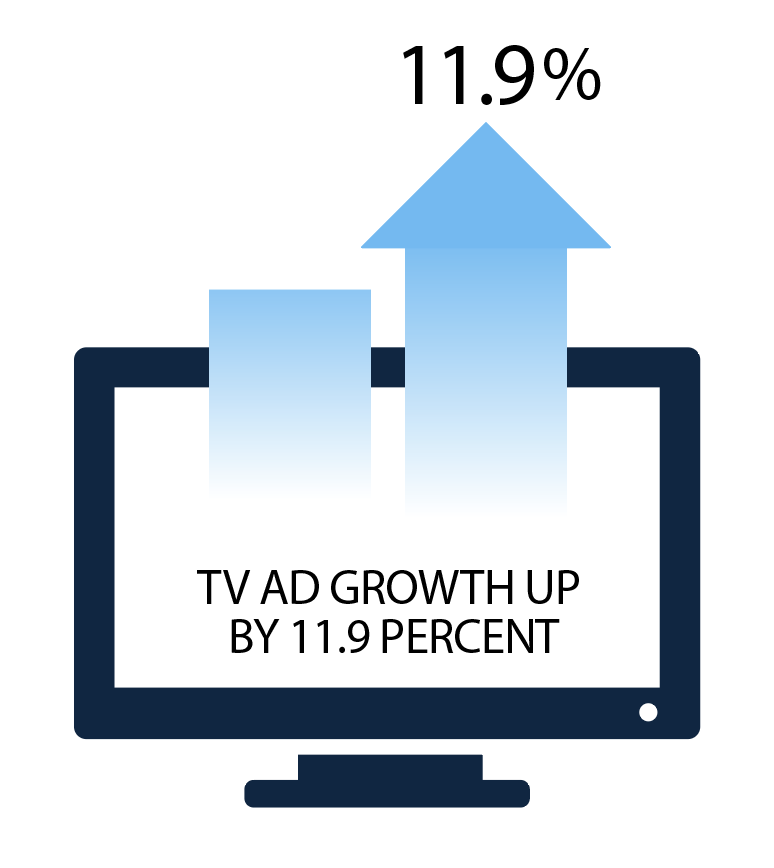 And despite data discussing linear TV in decline, smart and connected TVs are still the centerpiece of households. In fact, two in five consumers now have a next-generation TV with 75 percent of all streamed video coming through a TV set. Naturally, this impacts TV advertising strategies, becoming more hybrid-focused by capitalizing on the vast reach of TV and targeting digital to ensure the message reaches the intended audience.

Local markets traditionally have a more strong ebb and flow when compared to global markets. Of all the different video segments, local TV was the only channel to decline in 2021, dropping 13 percent to 16.2. But that’s to be expected in a non-political year. During an election year, local TV advertising always boosts as people turn to local news, increasing ad spending in this space as a result.

With another election year coming up in the US next year, local media buys are already starting to see a rebound. BIA in June estimated that local TV advertising revenue will grow by over 19 percent to just over 19 billion in 2022. But now their latest projects are saying that local TV advertising spend will rise by over 26% due to economic recovery and strong election spend.

What we’ll cover in this
TV advertising blog series

We’ll look at the top four trends in the TV advertising space to help you best leverage the channel.

How Broadcasters Can Justify TV Ad Costs to Advertisers

In this blog, we’ll dive into why broadcasters need to provide metrics of success and how this is achieved to ultimately help them win and retain more business.

Everything You Need to Know About TV Attribution

We’ll explore ad attribution and how this is typically done in linear channels such as TV with new tools that are changing the game for broadcasters.